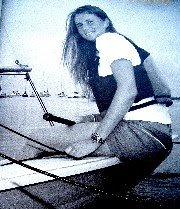 She will be competing in both the singles and doubles with Jannette Husarova.

Some tennis players have debated the Olympics' worth, as it falls in the middle of the Tour season and ahead of the US Open this year.

But Hantuchova said while some see the Beijing Games as a deterrent to playing well in Flushing Meadows, she sees it as another highranked hard court tournament to help fine-tune her game.

“Beijing will be the highlight of my year, so all the schedule around it will be so good that I will be as fresh as I can for the Olympics,” she said. “Nothing changes around the Grand Slams. Those are still the biggest events in tennis, and I will probably approach the Olympics as a fifth one, in terms of preparation. “Right after the Beijing Games is the US Open, which I don’t think is a big problem. “Hopefully, I will be in good form playing a lot of matches.

“The rest of the season won’t change for me either.” Another good reason why Hantuchova is so adamant about playing in the Olympics is that she wouldn’t be a tennis player if not for the world’s biggest multi-sports event.

“So, it means so much to me, and I just can’t wait to be out there.” Hantuchova said she would play in the doubles at the Beijing Games if the opportunity presented itself. The last Games i n Athens was a short stay for Hantuchova as she was ousted in the second round, but that didn’t stop her from experiencing the Olympics in the time she had.

“My first time around, I was going all over the places there,” she said.

“I was following my fellow athletes to all venues and I had a very good time. “It was crazy but I think this time I am going to concentrate on my sport. This time I’ll try and go for the medal.” The only sport she said in terms of wanting to go and see was short-distance swimming.

Hantuchova, after a Grand Slam lull in her career from the 2003 Roland Garros through to the 2005 US Open, has recorded six fourth-round appearances since 2006, including her semi-final appearance in the Australian Open in Melbourne last January. After her quarter-final win at the Australian Open, Hantuchova revealed that she used to play the piano after practices and matches to soothe her nerves.

“It was a great way to relax, especially after a tough practice, tough day at school. “I was always so tired and sometimes falling asleep there.

“I used to play all the classics — Mozart, Beethoven, Bach.

“That kind of stuff,” the Slovak added.