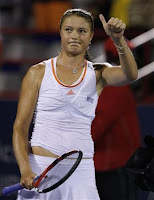 Russia's Dinara Safina had earned her ticket for the final following a three set victory over Victoria Azarenka of Belarus on Saturday night at Uniprix Stadium.

Watch the highlights of the quarterfinals at the Rogers Cup in Montreal.

Safina in the final four

The upsets continue at the Uniprix Stadium Friday night when Russian Dinara Safina, the seventh seed, eliminated her compatriot Svetlana Kuznetsova 2-6, 6-3, 6-2 to reach the semifinals of the Rogers Cup presented by National Bank.

The first hour of the match didn’t look like it was leading towards a Safina victory. Kuznetsova took the first set 6-2 and was leading 2-0 in the second when her rival lifted the level of her game.

“I wasn’t so worried,” said Safina. “The games were closer than the score indicated and I was confident that I could get back into it. I’m proud of tonight, glad that I was able to stay calm and play better and better. I reversed steam by putting more and more pressure on her.”

Kuznetsova was having trouble handling Safina’s first serves. When she was able to put them in play, she was met with deep and precise returns by her young opponent. She was only able to earn 49% of the points on her first serve.

As the seventh seed, Safina is now the highest ranked player in the final four of the Rogers Cup. She’ll play her semifinal match on Saturday evening.