Dinara Safina is no longer best known as former No. 1 men's player Marat Safin's precocious little sister. And she's no longer just another in a long line of promising young Russian tennis players.
Not after winning the German Open in May and then reaching the French Open final in June.

No, at the tender age of 22, the powerful 5-foot-11, 155-pound Safina is establishing her own identity. She needs no association, either brotherly or nationally, to earn recognition on the WTA, where she stands on her own as an emotional and aggressive force whose best tennis is ahead of her.

"The French was very big (for my confidence)," Safina said Wednesday after disposing of China's Shuai Peng, 6-2, 6-3, in the second round of the East West Bank Classic at Home Depot Center in Carson.
"I always feel I can do better, and then finally in Germany and at the French the results are big. It just proved to me what I can do when I play well."

Safina's best results came on Europe's clay, but she clearly is comfortable on the hardcourts that are the staple of the U.S. summer circuit.

In her first match after Wimbledon, she was relatively sharp and used her strong groundstrokes to overpower Peng whenever she needed to. She also displayed the athleticism that serves her well on clay and the feisty competitiveness that makes her future so exciting.

"She's not an easy opener after my vacation," said Safina, who is fourth-seeded in Carson and ninth-ranked in the world. "I think I played a pretty solid match, so I'm pretty happy.

"I have my best success on clay, but I like the hardcourts. You have to be a little more aggressive, take the ball a little sooner. I enjoy that."

Starting with this week's stay in Carson, where the road to a semifinal match against top seed Jelena Jankovic appears wide open, this promises to be an eventful summer for the still-improving Safina. She's 29-13 in 2008 and holds victories over the likes of Lindsay Davenport, Serena Williams, Elena Dementieva, Maria Sharapova and Svetlana Kuznetsova going into her first-ever Olympic appearance next month in Beijing.

Although she's a fighter on the court, she refuses to admit she carries lofty goals into the rest of the summer, including the U.S. Open.

"I just want to be healthy," she said, "then let's see how far I can get. I do take it one match at a time. There is no easy opener. You must be ready."

She is, course, excited about the Beijing Games.

"It is my first time, so I hope to do well," she said. "I'm not sure yet if I will go to the opening ceremonies because we play two days later, but if everyone says `let's go, let's go,' then of course I will go."

And if she doesn't follow up her French Open breakthrough with more semifinal or final appearances or a gold medal this summer? She will not be crushed.

"What can you do," she said, smiling.

Her breakthrough season has led to at least one change in her attitude, though. Next year, Safina will play with her brother in a mixed doubles event at the 2009 Hopman Cup.

"Dinara didn't feel really worthy at the time to play with her brother," tournament director Paul McNamee said recently. "She holds him in such high regard.

"But for the first time she feels as if she's worthy to play with her brother and why not? She reached the final of a major this year and is in the top 10 singles players in the world now."

Safina smiled when asked how exciting it was to play alongside her more famous brother, who at 28 is trying to regain his once-dominating form.

"Of course it is exciting," she said. "I hope we don't fight. Always he is not happy with my game."

That can't be true anymore. After all, it is Safina who is the current top-10 player in the family. 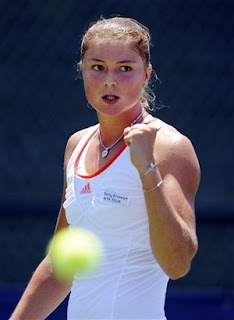 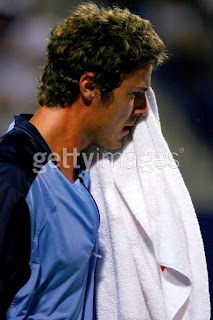 Damp conditions halted play and the first-round match between Russian Marat Safin and American Sam Querrey was suspended until Wednesday due to the rain. The duel will resume at 1-1 in the opening set. 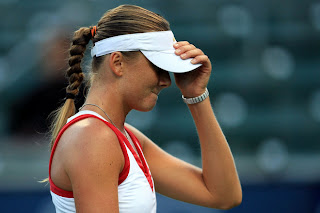 CARSON, Calif. -- Sixth seed Daniela Hantuchova, the runner-up in the East West Bank Classic three years ago, made an unexpectedly early exit on Tuesday night, losing to Olga Govortsova 6-2, 6-4 as the second round of the WTA Tour event began without Serena Williams.

Williams, the tournament's No. 2 seed, withdrew early in the day with a left knee injury.

Govortsova, 19, of Belarus, squandered three match points on her serve in the ninth game of the second set, then capitalized on the fourth one with a forehand to the open court at 30-40 on Hantuchova's serve. Govortsova, who is ranked No. 43, admitted to some nerves after taking a 5-1 lead in the second set, especially since the 12th-ranked Hantuchova had rallied in a similar situation to win their first meeting last year.

"When I was up 5-1, I started to think I'm going to win the match, then she started to play more aggressive," Govortsova said. "Then at 5-4, I started to hit the ball again and finally won. She hits the ball really deep and has a good serve. To beat her, you have to be aggressive."

Hantuchova, who still is trying to find her form after a long layoff from a stress fracture in her right heel, said that her game is "not there yet. I just have to be patient, keep practicing and keep working hard. It's a long way back."