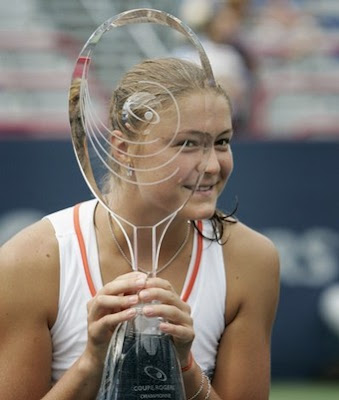 The Sony Ericsson WTA Tour announced the news on Thursday, just one day before the pair is scheduled to meet in the semifinals of the US Open.

The world’s top eight singles players and top four doubles teams from the 2008 Sony Ericsson WTA Tour season will compete for the Championships title and a share of the record prize money of $4.45 million.

“I am delighted to have qualified again for the Sony Ericsson Championships,” said Serena Williams in a statement released by the Tour. “It’s always an honor to play at the year-end Championships, and I’m looking forward to playing in Doha where I can hopefully show my best tennis.”

This season, the 26-year-old American claimed three singles titles at the Canara Bank Bangalore Open in Bangalore, the Sony Ericsson Open in Miami and the Family Circle Cup in Charleston. She was runner-up at Wimbledon, where she fell to sister Venus in her 11th career Grand Slam singles final.

“I am really happy about qualifying for the Sony Ericsson Championships,” Safina said. “I think this is the goal for every player to reach the Championships at the end of the year and finally my dream has come true.”

Safina has played her best season to date, winning Tour singles titles at the Qatar Telecom German Open in Berlin, where she defeated World No. 1 Justine Henin, the East West Bank Classic presented by Herbalife in Los Angeles and at the Rogers Cup presented by National Bank in Montreal for her sixth, seventh and eighth career titles.

She reached her first Grand Slam singles final at Roland Garros, finished runner-up at the Ordina Open at ‘s-Hertogenbosch and was the singles silver medalist at the Beijing Olympics.
“I’m delighted that Serena and Dinara have both qualified for this year’s Sony Ericsson Championships in Doha,” said Larry Scott, CEO of the Sony Ericsson WTA Tour.

“Dinara has had a fantastic run this year and absolutely deserves a spot in her first Sony Ericsson Championships. Serena is without doubt a true global icon and displaying wonderful tennis this season. Having both players showcase their talent in Doha will be great for tennis fans around the world.”

“We’re very pleased to see that Dinara and Serena have both qualified for the 2008 Sony Ericsson Championships in Doha,” said Aldo Liguori, Corporate Vice President and Head of Global Communications & PR at Sony Ericsson.

“They are both top seeds in the game and their considerable talent makes them fantastic ambassadors for women’s tennis. We’re sure they will make the season finale to the Sony Ericsson WTA Tour one of the most exciting yet.”