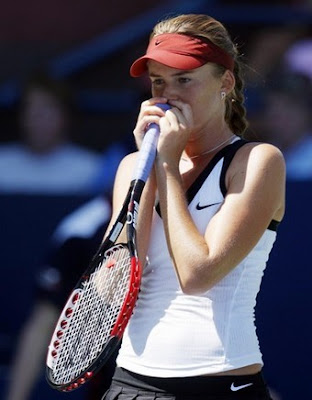 NEW YORK (Reuters) - Daniela Hantuchova, on the comeback trail after being sidelined with a foot injury earlier this year, was crushed 6-4 6-2 by German qualifier Anna-Lena Groenefeld in the U.S. Open first round on Tuesday.

The 11th-seeded Slovakian, who reached the last four at the Australian Open in January, struggled to find her range against the big-serving German and was swept aside in 71 minutes.

Groenefeld, world-ranked 141st after reaching a career-high 14th in 2006, kept her opponent on the back foot by dominating from the baseline and firing down seven aces.

"I really didn't get the chance to get into the match," world number 12 Hantuchova told reporters. "She was serving incredibly well and her first serves were around 125 (mph) which gave me no chance. I felt I was always under pressure."

The Slovakian said she had not fully recovered from the foot injury which kept her out of action for two months in the build-up to this year's Wimbledon.

"I don't feel 100 percent fit," she added. "The foot feels much better but I lost the feeling of playing and that takes time to get back."

Groenefeld, slowly working her way back up the world rankings after a protracted contractual battle with her former coach, was delighted to upset Hantuchova.

"It's a kind of a second chance for me in my career and I have a lot more influence now on what I am doing," said the 23-year-old, who stopped playing competitively for nine months when at her lowest ebb.

"I have just beaten Daniela so that's a great start. Ranking-wise, that's the best match I have played this year. Every win gives you more confidence and I believe I am on my way back.

"My serve is a great weapon of mine and I think I have improved it this year," she said after winning 96 percent of her first serve points.

"I was very happy with my first serves because I knew I had to play aggressively against her."

Groenefeld, who had to compete on the lower Challenger circuit after her ranking plummeted, said she had no desire to dwell on the past.

"I didn't play for eight to nine months because of everything that was going on behind the tennis lines," she added. "I had time off to re-group mentally. The final cut came just a couple of months ago.

"Everything is now over. I don't really want to think about the past again. I am much more relaxed and happy outside of the court."

Groenefeld will meet a wildcard opponent, either Australian Jessica Moore or American Melanie Oudin, in the second round. 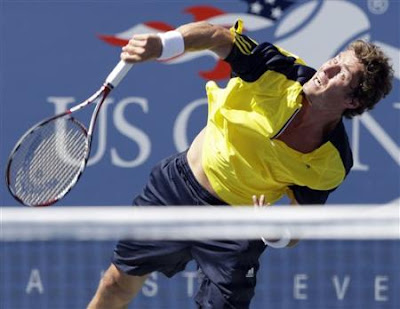 NEW YORK — It's do as I say, not as I do when it comes to Marat Safin and his up-and-coming sister Dinara Safina.

The little-known rule gave Spadea the game advantage and put him in position to clinch the fourth set on the next point.

"It's stupid rules that somebody made in, I don't know, 1850, and now they give me problems with these things," the still-perturbed Safin said. "It shouldn't be that way."

Safin grumbled at the linesman on the far end of the court and voiced his displeasure to chair umpire Carlos Bernardes. Speaking to him in Spanish, and in the universal language of frustration, Safin punctuated his remarks with expletives in English that were clearly heard.

He even sat on his chair mid-game in exasperation. After the set was lost, he went off court with tournament referee Brian Earley and took up the argument with him, to no avail.

Safin said, except for earlier this season in Cincinnati, he never had anyone call a foot fault against him on a second serve. He pleaded to be given a warning the first time he committed the fault before it would cost him a serve.

"I just want to have a nice match, win or lose, and whatever happens go home. That's it. I don't want to face the foot faults and all these things."

She is learning a lot from her big brother, especially how to act on court. Well, sort of. In the past, meltdowns have caused Safin to lose focus and, in turn, matches.

"I would behave like a baby and crying and all this. He hated it," the 22-year-old Safina said. "He was always, 'Come on! You have to grow up in your mind. You cannot behave like this. ... That's why he's like learn from my experience. Don't do this."

Safina, a finalist this year at the French Open and the Beijing Olympics, is one of six women who could be ranked No. 1 on the women's tour by the end of this tournament.

"I think if she will do everything opposite of what I've been doing throughout the years, she will be Number One in the world for a long time," Safin said. "That's as simple as it is.

Us Open : Safina shows no mercy to debutante Ahn 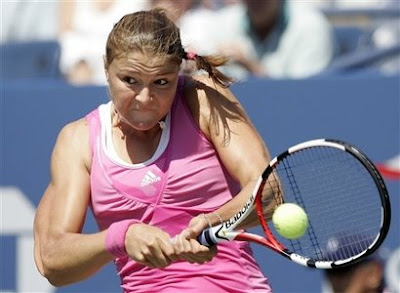 NEW YORK (Reuters) - Dinara Safina doused the youthful exuberance of grand slam debutante Kristie Ahn with a 6-3 6-4 win to reach the second round of the U.S. Open on Tuesday.

The Russian sixth seed made no allowances for Ahn, who at 16 is the youngest woman in the draw, and showed off her repertoire of groundstrokes and thundering serves to get her campaign off to a flying start.

With a ranking of 758 in the world, American qualifier Ahn would not have been expected to pose much of a threat to the in-form Safina but that did not stop the Russian from shouting and screaming her way to victory.