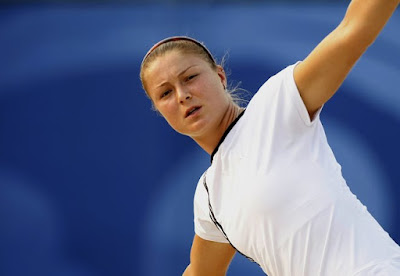 Nadia Petrova is ranked No. 18 in the world, but she won't be striking fuzzy tennis balls at the Beijing Olympics because her nation, Russia, is so rich in talent that she missed the cut.

Instead, the 26-year-old and former No.3 is heading to Cincinnati to compete against a small yet talented field that includes former No. 1 Amelie Mauresmo of France and former Wimbledon finalist Marion Bartoli.

Petrova, who competed in the 2004 Games in Athens and is a member of the Russian Fed Cup team, may not be competing in Beijing, but she has an opinion when it comes to picking who has the best shot to take home gold.

When asked to name five players with the best chance to win gold in Beijing, Petrova selected one Russian in her top 5 — Dinara Safina, the French Open finalist who just won back-to-back titles in L.A. and Montreal. The rest of her list included two Serbians — No. 1 Jelena Jankovic and No. 2 Ana Ivanovic — and Americans Venus and Serena Williams.

SAFINA: "Dinara looks so dominant — her facial expression has changed, her mental approach is different and she looks more grown up," said Petrova, whose mother Nadejda Ilina won the bronze medal at the Montreal Olympics in the 400m relay. "Reaching the French final really helped her confidence. Before she was just going to tournaments and trying to get as far as she could. Now, from what I've heard from her, she has the desire to become to No. 1 and has really set a goal for herself."

IVANOVIC: Petrova is not as enamored with the French Open champion Ivanovic's game and says it is going to be very difficult for the Serbian to impose herself as she's been unable to practice much due to a bad thumb injury.

The 20-year-old has been spectacular at times this year, but has also fallen into mini-slumps, unable to follow up her Parisian success with early exits at Wimbledon and Montreal. Petrova doesn't like Ivanovic's lack of a Plan B.

"She has big strokes, but I don't see much variety in her game," Petrova said. "Whenever something goes off, she's not able to control to the ball."

JANKOVIC: Petrova is a bit more impressed by Jankovic, who just became the first player in Sony Ericsson WTA Tour history to reach No. 1 without playing in a Grand Slam final. But she says that Jankovic's success is based more on her personal happiness than it is on pure ball striking.

"Jelena is very consistent and whenever she's playing she's going for every shot," said Petrova, who lost to Jankovic in L.A. "She's very focused from the baseline and she picks the right moments to go for her shots. As long as she's having fun, she's dangerous, but when she's kind of getting bored then it doesn't work anymore."

WILLIAMS SISTERS: Petrova readily acknowledges how dangerous the Williams sisters can be when healthy, but that's an open question in Beijing as both are coming off knee injuries.

Venus won the gold medal in singles in 2000, and she and Serena won the gold in doubles. But without having played a match on tour since winning her fifth Wimbledon title, Venus will have to round herself into form quickly. The seven-time Grand Slam champion has done so before, but given that she hasn't won a significant crown outside of Wimbledon since 2004 (Charleston on clay), her prospects are very much in doubt. In fact, Venus, a two-time U.S. Open champion, hasn't won a significant hard court tournament since Antwerp in 2003.

Serena is certainly gunning for Olympic gold and U.S. Open glory and told FOXSports.com a few weeks ago that her year won't be satisfactory without one of those titles. But she re-injured her chronically bad knee at Stanford and like her sister is very shaky when she has to play through pain.

THE REST OF THE FIELD: Somewhat surprisingly, Petrova didn't tab another one of her countrywomen, world No. 3 Svetlana Kuznetsova, as a player to watch. "She hasn't had great results recently, nothing outstanding," Petrova said. "For her it's a matter of will, but she can be dangerous if she has her mind on something."

Here's a few other medal hopefuls in stacked draw: No.5 and 2000 silver medalist Elena Dementieva, who plays the Ukraine's Kateryna Bondarenko in the opening round; No. 8 seed and teenager Agnieszka Radwanska of Poland, who faces Chan Yung-Jan; rising Belarusian Victoria Azarenka, who has shown terrific form as of late; and two other teens, Slovak Dominika Cibulkova — who reached the Montreal final — as well as Dane Caroline Wozniacki, who just won a tournament in Sweden on hard courts.