Us Open : An interview with Dinara Safina 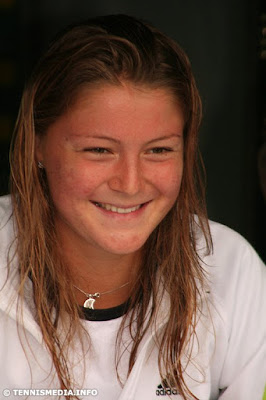 THE MODERATOR: Questions for Dinara Safina.

Q. Well, you have certainly come into the US Open as arguably one of the hottest players on the WTA Tour. If you can, talk about your level of confidence at this time.

DINARA SAFINA: Well, in the last 16 matches I lose only one match.

Q. What about this, the environment of the US Open? I mean, describe the environment here. Every Grand Slam has a different type of feel to it. Describe what it's like to play here at Flushing Meadows and your thoughts on that, please.

DINARA SAFINA: I don't know. Actually still I'm feeling okay. Sometimes getting closer I feel a little bit like this tension, you know, like Grand Slam.

But at the moment, you have so many tournaments in a row, so I just kind of lost those feelings. So at the moment I feel pretty calm. But in general, I mean, for me, this tournament is special because of my brother. That's why for me like coming here it's really always nice to come back here.

Q. Has he given you advice in terms of playing this particular tournament?

DINARA SAFINA: Not really. I don't know. For the last few months he's actually had success and doesn't follow me places.

Q. Give us your thoughts on the draw when you saw it come out on Thursday, potentially meeting Hantuchova in the fourth round.

DINARA SAFINA: I don't know that far. Thanks for telling me.

Q. How did you feel when you saw the draw come out?

DINARA SAFINA: Actually I look first round. I never look that far, because you just need to meet one player at a time. I don't know that I'm playing American girl, qualifier. So I just want to focus on my first‑round match and take it one match at a time.

Q. Can you give us your thoughts on winning the Olympic/US Open Series?

DINARA SAFINA: It's just coming too fast. I'm not used to it. If I was used to it I would say, Okay, I can think about it.

But at the moment, I just, I mean just coming too fast, everything, so I still cannot really take a breather and to realize what's going on. So I'm coming in and dreaming situation now.

Q. You've beaten 10 top 10s this year. Just in your opinion, are you playing the best tennis of your career, and is there any opponent out there that you have any concerns about?

DINARA SAFINA: Well, I just go out there and, I don't know, I play my game, and it's working right now. I mean, of course I've been working and still I'm working to improve my shots to get better and better.

I think that's what, it's the turning point. That's why I start to beat them.

Q. It really all started in Berlin. Do you think of yourself differently now than you did, say, in March or April?

My coach thinks there's still like so many things we can work on and to get me even better to improve, so I'm just following him.

Q. For you, was there a breakthrough moment this year? I mean, was there a time when you felt like you really got over the hump and was able to compete at the highest level?

DINARA SAFINA: I think it was Berlin. I don't know, I just went there and I said, I just want to go out there and play my game. I said, I don't care if I win the match or lose, but I'll just do what my coach tells me and just go for the shots. Certainly it worked out, and why I was not doing this before? But I don't know. Maybe it had to come to this moment.

And now, of course, I think that was a really breakthrough because I beat really good players there.

Q. Usually before the US Open you're here in the US Open Series, but you just came from Beijing. Is that more difficult than previous years?

DINARA SAFINA: Well, maybe just for the jet lag that I was waking up four days in a row at 4:00 in the morning. That's all.

But on the other hand, I'm thinking this week actually it's good, because I came from Beijing and I have this week to practice, you know, to work on the things.

Just taking it a little bit easier, because after LA I came straight to Montreal. I had only one day off to practice. From Montreal I had to go to Beijing, and then also like in three days I had to find my best game.

At least now here I could take a little breather and now I can practice easier without rushing somewhere.

Q. You had a good rest period?

Q. Can you just talk about your Olympic experience? First Olympic medal, but how did you enjoy the whole time there, the Olympics, representing Russia?

DINARA SAFINA: At the beginning was tough, because it was ‑‑ I mean, still it's a singles tournament. It's not like Fed Cup. It was like so many people always around us.

I mean, Russia is like this person, this person, and for me, I could not find really myself. It was really too much.

But then I slowly, as I said, like I don't need any attention like from the team. I have my team. Like I have my tennis coach, and I don't need anybody else. And then slowly I found myself. But really to go to other sports, to do this, to go out, I really had no time.

I arrived on Thursday, I had Friday, Saturday, Sunday to practice. Then once the tournament started, there really was no chance to go and ‑‑ especially longer it was going, when you're starting matches at 4:00 in the afternoon, and then it's ‑‑ really no time.

Unfortunately I couldn't watch any other sports. Hopefully maybe in four years I can watch some other sports.