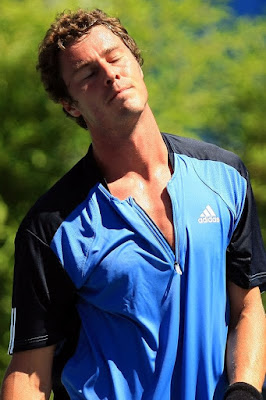 WASHINGTON, Aug. 12, 2008 (Reuters) — Marat Safin's U.S. Open preparations suffered a setback when the former world number one was forced to retire from his first round match at the ATP event in Washington with a neck injury on Tuesday.

The Russian sixth seed lost the first set against Italian Fabio Fognini 7-5 and then decided to withdraw from the match.

"I just blocked it and I pulled a muscle," Safin told reporters, adding that he suffered the injury on the second point of the match.

"It was getting worse and worse. I should have stopped earlier. I thought it might get a bit better, but it didn't."

Safin said he would now rest and then go to New York to prepare for the U.S. Open, which begins on Aug 25.

Despite the injury, Safin had surged into a 3-0 lead but after dropping his serve in the fifth game, the double grand slam winner requested an injury timeout.

With his flexibility restricted and his service speed well down, Safin was broken again in a protracted 11th game to give Fognini a 6-5 lead.

Dinara Safina: The future is now for Safina 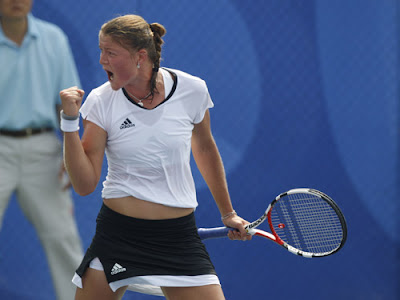 Perhaps we can stop using words like "promising" when it comes to players like Dinara Safina, enjoying now what you would call breakthrough seasons.

The nearly 6-foot, 155-pound Safina, like her up-and-down big brother, men's star Marat Safin, is a punisher of the ball, and has powered her way to a solid 40-13 record so far this year (after two rounds at the ongoing Olympic Games in Beijing), including three of her eight career titles and a current 12-match winning streak. She's rattled off 29 wins in her last 32 matches.

Safina's first title of the year came in Berlin back in May, as she upended Elena Dementieva in an all-Russian clay-court finale. In her next event, Safina soared all the way into the final on the dirt at Roland Garros, only to lose to world No. 1 (at the time) Ana Ivanovic in her first-ever Grand Slam final. On her way to the title match, Safina saved match points in back-to- back matches on her way to upsetting reigning Aussie Open champ and fellow Russian Maria Sharapova in the fourth round and Dementieva in the quarters.

Following the French Open, Safina landed in another final, but was shocked by Thai veteran Tamarine Tanasugarn in the title bout on a grass court in The Netherlands. En route to the final, Safina toppled her compatriot Dementieva, once again, in the semis.

Safina was a disappointing third-round loser (against capable Israeli Shahar Peer) at Wimbledon, but she promptly rebounded in her next tournament by capturing a hardcourt title in Los Angeles, and followed that up by corralling more hardware the following week on a hardcourt in Montreal. All this winning activity in North America produced a U.S. Open Series victory for Safina, which means she will double her prize money in New York. If Safina can win the title in Flushing, she would receive a record $2.5 million payout.

And when it comes to that precious Russian supremacy, Safina is a perfect 6-0, combined, against her fellow Top-10 countrywomen Kuznetsova (No. 3), Sharapova (No. 5) and Dementieva (No. 7) this year.

Safina opened 2008 ranked 15th in the world in singles and has shot up to No. 6, and she's ranked ninth on the planet in doubles, where she's also tallied eight career titles, including a pair this season.

Aside from an Olympic gold medal this week, the skyrocketing Safina has her sights set on the upcoming U.S. Open, where she'll be among the favorites. The powerful Muscovite reached the quarterfinals in New York two years ago, and made it to the fourth round there last year.

When you get right down to it, Safina appears to be headed toward an eventual Grand Slam title, which is something her former world No. 1 and two-time major titlist brother would know about. Safin is a former U.S. (2000) and Aussie Open champ (2005).

Did You Know?: Safina was the doubles titlist (alongside Frenchwoman Nathalie Dechy) at last year's U.S. Open.