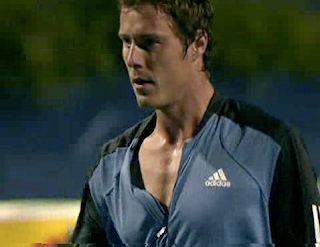 He beat Wawrinka in far more dramatic circumstances at Wimbledon a few weeks ago.

But this time, he had to briefly play late Tuesday night, get shut down by the rain, wait forever to play Wednesday because of a six-hour delay, and come back again Wednesday night to face a tough customer.

He was the one most affected by the weather issues, which is patently unfair.

It was an up-for-grabs match, with both players making a lot of errors. Safin served only 52%, and was 0-for-6 on break points, three of them in one game, when he was up 1-0 in the second set. Wawrinka held there, and then broke Safin, whereupon Marat fired a ball out of the stadium (or tried).

After that, it was only a matter of time.

Safin made the second round in Montreal a year ago, so his ranking won't change much either way because of this defeat.