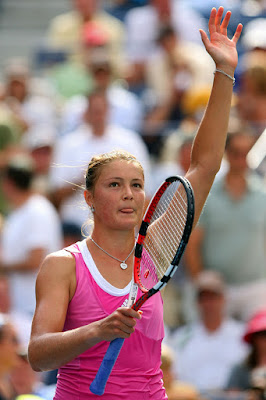 At almost six-feet tall, lean and muscular, and now in the best shape of her career, 22-year-old Dinara Safina is an imposing presence on the tennis court. Over the past year, she has become more and more of a force to be reckoned with in any tournament and came into this year’s US Open as the No. 6 seed, after reaching her all-time high world-ranking of No. 7 earlier this year.

Although she turned pro in 2000, she has been perceived for years simply as the little sister of 2000 US Open men’s champion Marat Safin. Now, she is one of five Russian women in the top 10 at this year’s US Open, and the improvement in Safina’s overall game has been obvious. She is playing faster and more aggressively; and through the quarterfinals has dropped just one set (to Timea Bacsinszky of Switzerland in the third round).

While she won the 2007 women’s doubles title at the US Open, and was the runner-up in 2006, Grand Slam singles titles have thus far eluded her.

However, in 2008 Safina did finally reach her first Grand Slam final – the French Open, ultimately losing to Ana Ivanovic of Serbia. Outside of Slam competition, she has racked up eight titles in 2008 and was the winner of the Olympus US Open series, leading up to the US Open.

An emotional person and player, Safina has struggled to get her emotions under control throughout the course of her career. Feeling at odds with her previous coach and how they worked together, she is now coached by Zeljko Krajan. Krajan, a former Croatian player, was recommended by fellow tennis player Ivan Lujubicic. The two started working together shortly after the 2007 US Open and Safina is pleased with the new partnership, which has clearly impacted her success level.

“Now I have tennis coach and fitness coach,” she said. "They are working together to get me better, so now I guess I have team that works for me.”

She also talked about the overall work she has done on her mental game.

“Most of the time the mind controls, but sometimes even the mind gets very tired of pushing yourself. So then come the moments that you say 'you don't care anymore.' But now I feel…I'm feeling better.”

Safina also battled chronic fatigue last year, but has bounced back physically and is learning to take better care of herself.

“Now I'm taking much more care about the food,” she said. “This is the most important thing for me now. I know what I can eat and what I cannot eat and when and what, so I'm taking really good care of it.”

With her life in balance, Safina is now totally focused on what she needs to do each day for each new match. After winning 16 straight matches leading up to the Beijing Olympics, Safina lost to countrywoman Elena Dementieva in the gold medal round, bringing home the silver.

While she is focused on the remainder of the US Open tournament, there is a lot more on her upcoming schedule. She plans to skip the Fed Cup in order to prepare for the Toray Pan Pacific Open in Tokyo. In January 2009, she and Marat will team up for the first time to play mixed doubles at the Hopman Cup in Australia.

But for now, Safina is looking toward just one match: the women’s singles semi-final in which she will face two-time US Open champion Serena Williams who will more than likely provide the biggest challenge she has faced to date. With her power and extraordinary ability to move around the court, Williams is a formidable opponent and enormous obstacle to Safina’s goal of a US Open championship.

When asked about the possibility of this, Safina said simply, “It will be the dream come true.”